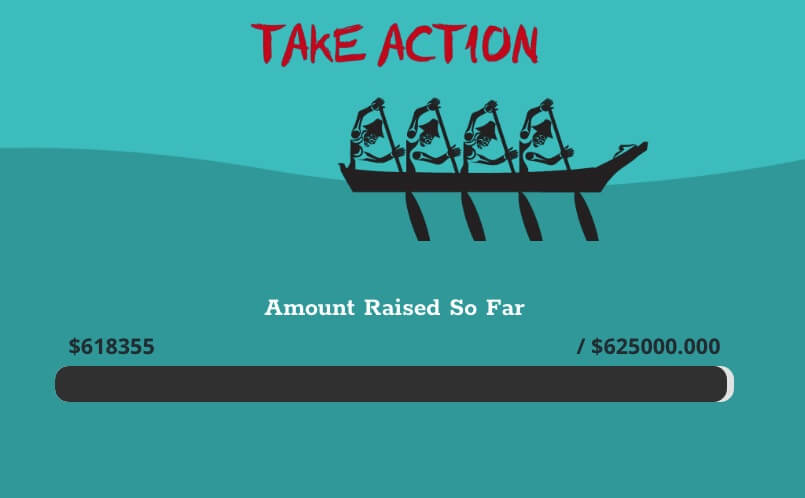 A year ago, the federal government approved the Kinder Morgan pipeline and tankers project, against the clear wishes of Indigenous leaders and most of coastal BC. Since then, this community has shown how strongly we believe in an oil-free coast by raising an amazing $615,000, building powerful relationships with Indigenous Peoples and fostering a vibrant community of resistance.

Thanks to you, Pull Together is SO CLOSE to our goal of raising a $625,000 legal fund for the four first nations we are partnered with.

The legal fight is far from over. Lawyers on the case say an appeal is likely regardless of the outcome of the first round of hearings. Pull Together is concentrating on raising legal funds for four of the Nations fighting Kinder Morgan in court: it’s a big job and we are committed to staying with these cases through to the end. So, though we’re close to reaching our initial goal, we intend to quietly keep going so we can support First Nations partners when they need our help in 2018.

Like you, we won’t give up until we see justice served and this unwanted project blocked.

We’re absolutely blown away by the unbelievable level of support that you have shown! While the fight continues on many fronts, let’s take this opportunity, a year on, to appreciate what we’ve achieved together. It’s beyond words how much we admire each and every person who has put their creative energy into making Pull Together so huge, powerful, and fun.

Pull Together is an alliance between Sierra Club BC, RAVEN, Force of Nature, and you. From all of us to all of you, we most sincerely and humbly say,

— The Pull Together team

p.s. With construction at the Burnaby tanker terminal aggressively underway, despite the active court challenges, it is inspiring to see so many people continue to step up and peacefully resist. While Pull Together is solidly focussed on supporting legal actions, we encourage you to check out #TinyHouseWarriors and follow news and alerts being issued by the Union of BC Indian Chiefs for other ways to help.

Beacons of hope for the Salish Sea

The Fight to Stop Trans Mountain is Far from Over